The Cause, Prevention and Detoxing of Candida Yeast

The incidence of people with bowel troubles is on the rise in the western world. Though the afflictions bear several names, it is my belief that all of them are fungus based. Various species of candida, most notably candida albicans, are at the root of these problems. How do they enter into your system? Well, for the most part they’re already there. Like all natural fungi they serve a useful purpose and candida are therefore a natural part of your intestinal flora. Problems arise when these yeast fungi lead to overgrowth as a result of three different triggers: sugary foods, drugs and stress. Compare that to the western lifestyle and you can see why so many people have bowel problems today. It’s a wonder some people don’t have yeast overgrowth!

Yeast bacteria can also enter your system by eating molded bread or being exposed to molds at home or elsewhere. As soon as the environment is favorable to these bacteria they will immediately increase their numbers and colonize their living environment, starting with the intestines and then moving on to other parts of the body by developing spores and traveling through the bloodstream. Antibiotics and other ‘medicines’ are the worst culprits. ‘Antibiotic’ means ‘anti-life’. Antibiotics are designed to kill any bacteria in their path and that includes friendly probiotic gut bacteria who, contrary to candida, are not resistant. Other promoters of yeast overgrowth include cortisone based hormonal drugs (including skin applications) and painkillers. Stress and sugary foods are also detrimental to probiotic gut bacteria.

This clears the path for yeast colonization. They seem to favor mucus membranes particularly and will damage them wherever they decide to settle. They can damage the mucosal lining of the gastrointestinal tract by making it porous. As a result, food particles can enter the bloodstream undigested and cause toxic and allergic reactions. This is known as a “leaky gut”. Candida fungi can also slip through these pores and enter the bloodstream. By dwelling in various other parts of the body they can then cause allergic symptoms in the weirdest places. Hence fungal toenails, thrush, sinusitis, etc. They are very clever and adaptable and the more they spread and grow in number, the more they will inhibit the immune system; causing anything from chronic nose-colds, flus and hay fever to psoriasis, hypoglycemia, arthritis, diabetes and Chronic Fatigue Syndrome, even depression. Candida thrive on sugary foods and by eating and drinking them people will actually feed the candida. People developing various allergic symptoms will rarely trace back these symptoms to their foods and lifestyle, however.

Fatal and Vital Foods For Dealing With Candida

Bad foods can either cause a fungal problem or help exacerbate it, or both. Good foods, on the other hand, can help cure fungal overgrowth. So what’s good and what’s bad? Candida love a sweet environment. Thus all sugars are bad. Dietitians will often say only fast sugars are bad and slow sugars are good. Thus they will advise against white sugar and white flour and will advocate the use of raw cane sugar and whole-grain products. Sorry if you’re a sweet tooth and “carboholic”, but all sugars are out if you really want to starve candida.

This means you will have to wean yourself off:

You will be amazed at how many products contain sugar and/or grains. In fact, you will find that many so-called “health products” are also loaded with sugars and grains. Life will become a little bit more difficult when shopping for food items and you will have to learn to read the list of ingredients instead of the nutritional information. Forget calories and, whatever you do, don’t fall into the trap of buying anything that is labeled “diet” or “light”, particularly if these products contain artificial sweeteners such as the very dangerous neurotoxin and carcinogen aspartame and other related additives such as sucralose (Splenda), which are all made in a lab instead of a kitchen. These include flavor enhancers such as MSG (mono sodium glutamate) and other neurotoxins. The supermarket is not the best place to get food items, so this is a good reason to buy organic and to do it from local farms, if you care about avoiding food additives, pesticides and growth hormones. 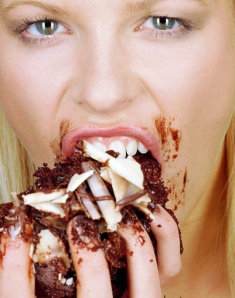 Although honey and maple and agave syrup can and have been proven very beneficial to people’s health they are a definite no-no if you have candida. The same is true for pineapple, bananas, papaya and other sweet fruits – even caffeine and alcohol in small amounts. The point is not to feed the candida any sugars, period. The only exception is stevia, which is a plant that is 300 times sweeter than sugar, yet it is perfectly healthy for you. You can buy it as a tincture with alcohol (not recommended), diluted in water, or in its pure form as a powder. I recommend getting the latter but be very careful when using it as it is extremely sweet. You can get stevia on the web, just Google for it.

Starchy foods are not necessarily bad for you either. Jacket potatoes are better than peeled ones. That is because you are refining the potato by removing the fiber (peel), leaving only the sugar (starch). Sweet potatoes and yams are very good foods indeed, but not if you have candida. Once again, the idea is to starve candida by not giving them sugars.

Unpasteurized, raw milk products can be very beneficial to your guts and liver. It naturally contains all the probiotic bacteria present in yogurt. Why raw milk is banned and yogurt isn’t is beyond me. Think about it, dairy farmers are obliged to use pasteurized milk as a basis for yoghurt and then reintroduce the same bacteria they killed when they heated the milk to make the yogurt! Although commercially available yoghurt, including organic yoghurt, is all made from pasteurized milk it is still a product I highly recommend. The reintroduction of probiotic bacteria largely undoes the damage caused by pasteurization.

As you can see, the truth is sometimes somewhere in the middle. Simple sugars are bad, complex sugars are not. Milk lactose is one such complex sugar. The sugars in, for example, cabbage and green leafy vegetables are all complex sugars, or polysaccharides. They are complex because chemically they consist of a longer chain than simple sugars. Basically, the shorter the chain the faster the sugar and the worse they are for your health. Some natural foods contain very long-chain sugars. These foods, interestingly enough, taste bitter! A good example of this is mushrooms such as reishi, shiitake and maitake, all of which are non-destructive and healing fungi. Which brings me to the next subject.

Just like there are good sugars, there are also good fungi. Eating ordinary mushrooms is not a good idea if you have candida because you’re feeding it its own kind. There are, however, medicinal mushrooms which are actually a great idea to consume, either raw or as a tea or stock or even as a supplement. Asian cuisine, most notably Japanese cuisine, has a long history of eating and preparing medicinal mushrooms. Examples of these are shiitake, maitake and reishi. Bear in mind that the longer you cook these mushrooms the more you are converting the complex sugars into simple sugars (carbohydrates), just the way pasteurization changes the chemical structure of milk and other foods.

Eating blue cheeses is also not a good idea if you have candida. These fungi are introduced into the cheese and, though they are tasty, are harmful to your health if you have a fungal problem. In the same vein, Brie and Camembert are also out.

Try the above no-sugar-no-grains-no-yeast-no-fungi diet for four weeks. You will find yourself going through a detoxification period which can last the whole four weeks or end after one or two weeks, depending on how much detoxing you have to do. The first week is the worst. You will feel absolutely miserable, have cravings for sweets and junk foods, experience moodiness, near-depression, everything is possible. This is because the candida are demanding their nutrition. You must be strong at this stage and not give in. You will also experience windiness of a very smelly kind, a sign of detoxification of the intestines. You may have a ‘brick-in-your-stomach’ feeling for some time, diarrhea, headaches, dizziness – even vomiting is possible. Do not despair, as there will be a turning point where you will increasingly start to feel better.

After the first four weeks, you can then slowly reintroduce healthy foods which were forbidden before such as honey, maple syrup, dark, unfiltered agave syrup (the lighter variety will still give you a sugar hit), corn, (sweet) potatoes, yams, and various sweet fruits back into your diet. Because of the detoxing you have done you will now get a pure, unbiased and more or less immediate reaction from your body. If the food feels good, continue eating it but don’t overdo it. If it feels bad, stop eating it straight away. It’s that simple.

These food choices are very easy on the liver and guts, which means they not only help battle candida, but they are also powerful immune boosters. They will help you lose weight as well as help maintain your natural weight, ward off diabetes, arthritis, viruses, parasitic and bacterial infections, and promote overall good health of skin, bones, tissue, cartilage, etc.

The great news is you don’t have to sacrifice a thing taste-wise. In fact, by freeing yourself from the sweet and salty carb-rich foods our toxic food environment provides us with you are making use of all four tastes nature has provided you with. Once you discover that whole, living foods give you more energy and need not cost more both money-wise and health-wise, you won’t be able to go back to potato chips, burgers, cookies and other empty junk foods. You will find that your appetite will go down and you will need less food to keep you going for a longer time. And even if you do end up spending more money on good-quality foods, my question to you is: which would your rather pay with, your wallet or your health?