6 Appetizers with more calories than an entree

2 Comments Posted by docakilah on September 5, 2011 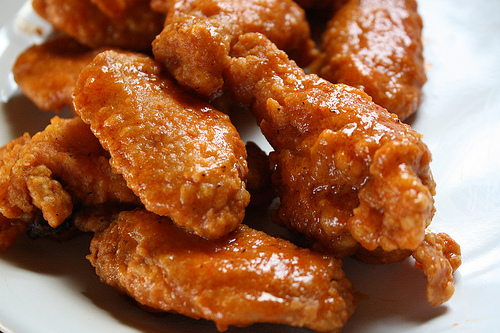 When you sit down in a restaurant and order an app, you don’t expect it to equal or exceed the calories in a main meal. Unfortunately, many popular appetizers contain astronomically more calories, fat, and sodium than you should consume or the day, let alone in your pre-entrée nosh. What’s worse is that apps tend to be a shared experience, with three-or-more split between everyone at the table, so it’s easy to lose track of how much you actually eat. Our advice? When you’re dining out, skip the apps in favor of a small green salad and recreate these perennial favorites at home for a fraction of the calories and fat.


1. Stuffed Jalapeno Poppers These spicy stuffed poppers not only come at a high heat, they also come at a steep caloric cost. One plateful of these peppers tallies over 1,900 calories, 135 g of fat, and over 6,000 mg of sodium! (Yes, that’s right 6,000 mg of sodium.) You could have ordered 9 chicken enchiladas and still saved 36 g of fat and 2,000 mg of sodium.

Make it Yourself: Spicy Jalapeno Salsa We love spicy food: Not only does it pack a whole lot of flavor, the capsaicin found in chiles are known to kick your metabolism into high gear. Opt for this fiery jalapeno salsa instead of the fattening poppers: This version uses chili powder as well as jalapeno peppers to give this sauce a zesty punch. Plus, it amounts to under 10 calories per serving.


2. Boneless Buffalo Wings With Blue Cheese Stop trying to kid yourself that the celery stalk that comes with the basket of wings makes this starter a healthy choice: One order of these saucy snackers amounts to almost 1,500 calories and 4,590 mg of sodium. That’s the salt equivalent of gorging on over 2 large bags of potato chips before your main entrée.

Make it Yourself: Waistline-Friendly Buffalo Wings These wings have all the qualities you love—smoky and fiery chicken coated with a finger-licking-good sauce—but they come with a fraction of the calories, fat, and sodium. One serving of these has less than 220 calories and nearly a 10th of the sodium.

3. Stuffed Potato Skins While potato skins are not regarded as a typical healthy choice, these “loaded” appetizers may be far worse than you anticipated. The boat-like munchies are usually brimming with high-calorie and high-fat ingredients like sour cream, bacon, and a medley of melty cheeses, but all that indulgence comes at a price: One plate of these is 2,070 calories. It’s also got 135 g of fat, the equivalent of over a dozen chocolate donuts.

Make it Yourself: Spicy Potato Skins Baked potato? Check. Sour cream? Check. Cheddar? Check. Bacon? Yup, we’ve got that too. These creamy and delicious potato skins have every element of classic stuffed potato skins, plus a few added extras (like some chile peppers), but they have less than a fifth of the caloric cost.


4. Guacamole And Chips We absolutely love avocado: It’s got a rich, buttery taste, and it’s packed with belly-flattening MUFAs. Unfortunately, not all guacs are created equal. Some restaurant versions really pack on the calories and salt—one platter of chips and dip could amount to close to 1,400 calories and 84 g of fat, not to mention over 2,000 mg of sodium.

Make It Yourself: Guiltless Guacamole This unique recipe for guacamole cuts calories, fat, and sodium with one simple (and yummy) swap. This version is not only packed with MUFAs, but it’s brimming with vitamin A as well as folate.


5. Beef Nachos  It’s hard to resist the tempting call of layers of tortilla chips, melted nacho cheese, onions, peppers, and juicy beef. But you would be all the wiser to stray from this fattening app tower: One plate has 1,700 calories and over 3,500 mg of sodium.

Make it Yourself: Cheesy Nachos Hold the beef with your nachos: That simple skip will cut a ton of calories, and you won’t be left wondering, “Where’s the beef?” This recipe, complete with blue corn chips and a layer of cheese, comes in under 250 calories per serving.


6. Chicken Strips Ordering an individually sized chicken appetizer may make you believe that you are playing it safe when it comes to keeping your eye on your waistline. Think again. A single serving of sesame chicken strips amounts to more than half of your day’s calories and over 2,600 mg of salt.

Make it Yourself: Parmesan Chicken Strips Try these breaded Parmesan chicken strips instead: They’ve got that scrumptious crunch and a rich, cheesy coating with one plateful tallying up to a mere 167 calories.

Akilah M. El, N.D. is a Naturopathic Doctor and certified Master Herbalist with a private practice in Atlanta Georgia and Berlin Germany. Join Dr Akilah El on Facebook and Twitter

2 responses to “6 Appetizers with more calories than an entree”