The Truth About Agave Nectar

As it turns out, I hadn’t. Earlier this week a reader emailed me, seeking an answer to the classic question: Agave nectar — good or bad? She pointed out that she’d done a search for agave nectar on this site and only turned up two entries. In one, I’d said to avoid it. In another, I mentioned that I’d used agave nectar while experimenting with kombucha and didn’t enjoy the results.

So, she concluded: “Why, if agave nectar is a natural sweetener, should it not be used? What about it is bad? I’ve been preferring it to honey and maple syrup on my waffles, pancakes, and yogurt.”

I realized then that I needed to post a definitive guide to agave nectar, answering the question once and for all. This is it.

The short answer to that reader’s question is simple: agave nectar is not a “natural sweetener.” Plus, it has more concentrated fructose in it than high fructose corn syrup. Now, let’s get into the details.

Agave Nectar Is Not A Natural Sweetener

Once upon a time, I picked up a jar of “Organic Raw Blue Agave Nectar” at my grocery store. It was the first time I’d ever seen the stuff in real life, and the label looked promising. After all, words like “organic,” “raw,” and “all natural” should mean something. Sadly, agave nectar is neither truly raw, nor is it all natural.

Based on the labeling, I could picture native peoples creating their own agave nectar from the wild agave plants. Surely, this was a traditional food, eaten for thousands of years. Sadly, it is not.

Native Mexican peoples do make a sort of sweetener out of the agave plant. It’s called miel de agave, and it’s made by boiling the agave sap for a couple of hours. Think of it as the Mexican version of authentic Canadian maple syrup.

But this is not what agave nectar is. According to one popular agave nectar manufacturer, “Agave nectar is a newly created sweetener, having been developed in the 1990s.” In a recent article now posted on the Weston A. Price foundation’s website, Ramiel Nagel and Sally Fallon Morell write,

Agave “nectar” is not made from the sap of the yucca or agave plant but from the starch of the giant pineapple-like, root bulb. The principal constituent of the agave root is starch, similar to the starch in corn or rice, and a complex carbohydrate called inulin, which is made up of chains of fructose molecules.Technically a highly indigestible fiber, inulin, which does not taste sweet, comprises about half of the carbohydrate content of agave.

The process by which agave glucose and inulin are converted into “nectar” is similar to the process by which corn starch is converted into HFCS. The agave starch is subject to an enzymatic and chemical process that converts the starch into a fructose-rich syrup—anywhere from 70 percent fructose and higher according to the agave nectar chemical profiles posted on agave nectar websites.

Compare that to the typical fructose content of high fructose corn syrup (55%)!

They are indeed made the same way, using a highly chemical process with genetically modified enzymes. They are also using caustic acids, clarifiers, filtration chemicals and so forth in the conversion of agave starches into highly refined fructose inulin that is even higher in fructose content than high fructose corn syrup.

So there you have it. Agave nectar is not traditional, is highly refined, and actually has more concentrated fructose than high-fructose corn syrup. It is not a “natural” sweetener. Thus far, the evidence definitely points toward the conclusion: Agave Nectar = Bad.

“But,” you ardent agave nectar enthusiasts say, “agave nectar has a low glycemic index. I’m a diabetic, and it’s the only sweetener I can use!”

First, we need to clarify something. Concentrated fructose is not found in fruit, or anywhere else in nature. When the sugar occurs in nature, it is often called “levulose” and is accompanied by naturally-occurring enzymes, vitamins, minerals, fiber, and fruit pectin.  Concentrated fructose, on the other hand, is a man-made sugar created by the refining process. To clarify:

Saying fructose is levulose is like saying that margarine is the same as butter. Refined fructose lacks amino acids, vitamins, minerals, pectin, and fiber. As a result, the body doesn’t recognize refined fructose. Levulose, on the other hand, is naturally occurring in fruits, and is not isolated but bound to other naturally occurring sugars. Unlike man-made fructose, levulose contains enzymes, vitamins, minerals, fiber, and fruit pectin. Refined fructose is processed in the body through the liver, rather than digested in the intestine. Levulose is digested in the intestine. (source)

I want you to pay special attention to those last two sentences, for they are a huge key that will help unlock the mystery of why 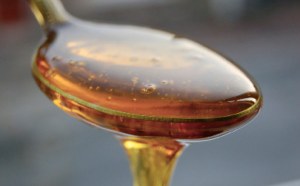 fructose is bad for you.

Because fructose is digested in your liver, it is immediately turned into triglycerides or stored body fat. Since it doesn’t get converted to blood glucose like other sugars, it doesn’t raise or crash your blood sugar levels. Hence the claim that it is safe for diabetics.

That’s because fructose inhibits leptin levels — the hormone your body uses to tell you that you’re full. In other words, fructose makes you want to eat more. Besides contributing to weight gain, it also makes you gain the most dangerous kind of fat.

This has been verified in numerous studies. The most definitive one was released just this past year in the Journal of Clinical Investigation. The full study is available online, but for the sake of space I’m including Stephan’s (of Whole Health Source fame) summary here:

The investigators divided 32 overweight men and women into two groups, and instructed each group to drink a sweetened beverage three times per day. They were told not to eat any other sugar. The drinks were designed to provide 25% of the participants’ caloric intake. That might sound like a lot, but the average American actually gets about 25% of her calories from sugar! That’s the average, so there are people who get a third or more of their calories from sugar. In one group, the drinks were sweetened with glucose, while in the other group they were sweetened with fructose.

After ten weeks, both groups had gained about three pounds. But they didn’t gain it in the same place. The fructose group gained a disproportionate amount of visceral fat, which increased by 14%! Visceral fat is the most dangerous type; it’s associated with and contributes to chronic disease, particularly metabolic syndrome, the quintessential modern metabolic disorder (see the end of the post for more information and references). You can bet their livers were fattening up too.

The good news doesn’t end there. The fructose group saw a worsening of blood glucose control and insulin sensitivity. They also saw an increase in small, dense LDL particles and oxidized LDL, both factors that associate strongly with the risk of heart attack and may in fact contribute to it. Liver synthesis of fat after meals increased by 75%. If you look at table 4, it’s clear that the fructose group experienced a major metabolic shift, and the glucose group didn’t. Practically every parameter they measured in the fructose group changed significantly over the course of the 9 weeks. It’s incredible.

Back to our original question — Agave Nectar: Good or Bad?

The conclusion is clear. Agave nectar is bad for you. It’s not traditional, not natural, highly refined, and contains more concentrated fructose than high fructose corn syrup.